Day 1: Cape Town. Arrive at the Cape Town International Airport. Meet and greet at the Airport and transferred to one of Cape Town's finer hotels. Rest of the day at your leisure to explore your surroundings and partake in the activities. Overnight and Breakfast at the luxurious Commodore Waterfront Hotel.

Day 2: Cape Town After breakfast, you'll be picked by your guide. You will be treated to a scenic drive through Sea Point, the beaches of Clifton and Camps Bay to Hout Bay. You will then be treated to the view of Cape Point from the top of Table Mountain. Table Mountain is one of South Africa’s best known landmarks. The top is approximately 2 miles wide and its highest point 3000 ft. above sea level. The summit can be reached by a cable car with a revolving floor for panoramic views. The spectacular Chapman’s Peak drive is breathtaking and will lead you to Cape Point and the Cape of Good Hope Nature Reserve, undoubtedly one of the Cape’s biggest attractions.

Day 3: French Wines - When the French settled in this area in 1688 it was for the purpose of making wine. Our visit starts on the outskirts of the town, at two of Franschhoek's most respected wineries, Boekenhoutskloof, with winemaker Marc Kent voted 2007 Diners Club Winemaker of the Year, and Graham Beck Wines known for their conservation principles which won them the Biodiversity Champion status, as well as for winning the 2007 Cap Classique Challenge for their Brut Chardonnay Pinot Noir 1994. We will spend the night and have dinner at one of the wonderful hotels located in the heart of the wine country.

Day 4: Stellenbosch – South Africa's second-oldest town via Helshoogte Pass with it's spectacular views, stopping for tasting of the critically lauded wines at Thelema Mountain Vineyards, once a neglected fruit farm. At the beautifully restored farm in the Simonsberg foothills, which has historical heritage status, Rustenberg, we taste, amongst others, the Caylon Trophy award winning wine before heading for the luxurious accommodation that awaits you at River Manor.

Day 5: Oudshoorn - Knysna. First stop. The magnificent Cango Caves. Explore the dens accompanied by a specialist guide. Next is a visit to an ostrich farm where you can participate in ostrich riding.
Lunch on the farm. Afternoon visit to the Cango Wildlife Ranch where you can view crocodiles, lions, cheetahs, pumas and jaguars. Cross the Outeniqua mountains towards George and on to Knysna where we overnight. Overnight at the 4 star Knysna Logg Inn for the next two nights. Dinner included.

Days 6-7 Travel two hours to Addo elephant park. Addo holds over 400 elephant, cape buffalo, rhino and several species of African plains game in its 300,000 acre boundary. While in Addo you will be treated to game drives allowing you to see the many species of African game in their natural habitat. You will be spending the night in one of Addo’s luxurious safari lodges. 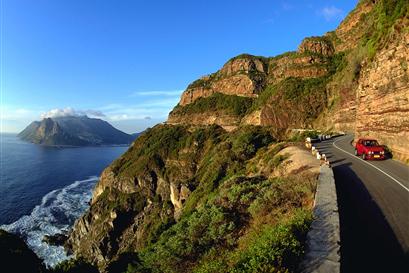 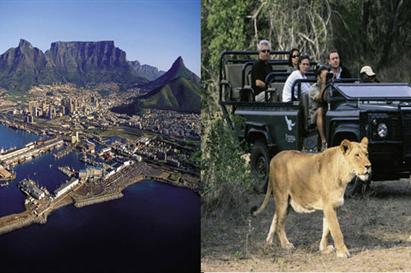